Via Twitter, Nate Hough-Snee asks whether zombie ideas about the IDH are actually taught any more, and suggests that the idea that the IDH is still popular is itself a zombie idea. That’s a question I’ve asked myself about another zombie. But I was wrong. And in this case, well, sorry Nate, I sincerely wish you were right, but…

Searching Web of Science for “intermediate disturbance hypothesis” yields the following plot of the number of citations/year, which includes citations only to items indexed in Web of Science: 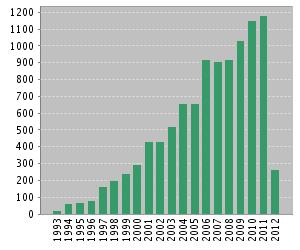 See any sign of declining popularity there? Neither do I.

And here’s a plot of the citations/year in the Web of Science database of two key IDH papers. Connell (1978) coined the term “intermediate disturbance hypothesis”, and Huston (1979) is the source of a key zombie idea about how disturbance affects coexistence. I left out Hutchinson (1961) because it’s often cited for reasons that have nothing to do with Hutchinson’s zombie idea about how disturbance can promote coexistence. Also plotted are data for several papers theoretically or empirically refuting zombie ideas about the IDH (Chesson and Huntly 1997, Pacala and Rees 1998, Mackey and Currie 2001, Roxburgh et al. 2004, Shea et al. 2004). Note the log scale on the y-axis. 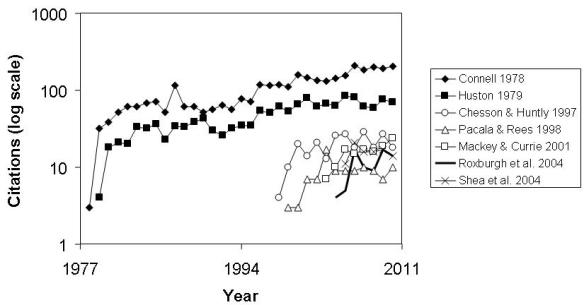 As to whether zombie ideas about the IDH are still taught in undergraduate curricula, they aren’t any more at Calgary, but I doubt we’re typical. Certainly, zombie ideas about the IDH are still in our textbooks. The current (4th) edition of Begon et al.’s Ecology: From Individuals to Communities* continues to summarize an entire section (8.5) of the chapter on competition with statements like “Even when interspecific competition occurs it does not necessarily continue to completion”, and continues to devote an entire subsection (8.5.3) to a summary of Hutchinson’s zombie idea about how fluctuating environments promote coexistence. The 4th edition of Ricklefs and Miller’s Ecology includes in its online review material for the chapter on competition theory the claim that predators can promote coexistence by reducing competitor populations to a low level, so that “resource limitation is no longer a factor”, and repeats this claim in a review question for the chapter on competition in nature.

Believe me, I would love to discover that my crusade against these zombie ideas is unnecessary because everybody actually agrees with me already, and nobody teaches these zombies anymore. But all the evidence indicates that many, many ecologists still believe in these ideas, still base ongoing research on them, and still teach them. So yeah, the IDH zombies are still worth worrying about.

*UPDATE: In fairness, the 4th edition of Begon et al. actually does a better job on disturbance effects on coexistence than the second edition does. The introductory passages, while not zombie-free, are improved, and unless I missed it there’s no longer any discussion of Huston (1979).

8 thoughts on “Yes, IDH zombies are still worth worrying about (UPDATED)”