Lots of good stuff this week! I saved the best for the very end to force you to read the whole thing. No need to thank me. 🙂

How to do great research. Classic piece. (HT neuroecology)

Zen Faulkes of NeuroDojo makes a great point about scientific talks as “stories”. Yes, a good talk “tells a story”, but that’s not sufficient. As illustrated by the fact that movies with the same story often vary wildly in quality (Zen’s fun example is different versions of King Kong). Execution matters.

Meg’s talked in the past about how she uses clickers in her lectures. If your university doesn’t have a clicker system, or you don’t like the one it has, here’s how to use Google Docs as a free clicker system.

A little while back, Amy Parachnowitsch surveyed ecologists on what they teach and how they teach it. On Tuesdays in the coming weeks, she’ll be doing a series of posts at Small Pond Science called “Teaching Tuesdays”, in which she’ll share the survey results. The introductory post to the series is here. I’m already looking forward to next week’s post on what ecologists find difficult to teach.

The Bet is a new book chronicling the famous Ehrlich-Simon wager on whether or not human population growth would lead to resource scarcity and skyrocketing resource prices (discussed briefly in this old post). The book uses the bet as a jumping-off point for a history of environmentalism in the US over the last few decades. It’s on my reading list. Here’s a NY Times interview with the author. (HT Economist’s View)

Political science blog The Monkey Cage is doing a series of posts on the gender gap in academia and what can be done about it.

And finally, of course you can use the adaptive behavior of chickens to sell cars. The adaptation in this case is the head-bobbing behavior chickens use to stabilize their visual field as they move. In the comments, suggest other surprising products that could be sold by linking them to adaptations. I’m trying to think of a product that could be sold by this ciliate. 🙂 (HT Cute Overload)

The New York Times has a long but well-written and thoughtful piece on why there are still so few women in science.

A few links related to the US government shutdown. First, information on the shutdown for NIH- and NSF-funded researchers. (ht: Jacquelyn Gill) Second, a screenshot gallery of the shutdown from Jonathan Eisen. Third, working on an NSF DDIG, GRFP, or regular proposal but don’t have the solicitation? Brian O’Meara has them on his website! (ht: Terry McGlynn)

Have you ever wondered about how you would move your -80 to a new job? Joan Strassmann has an interesting post on this. I didn’t move any -80 samples with me when I moved, so I didn’t have to worry about this. Our big concern was moving all of our Daphnia cultures. In the end, my grad student drove them up from Atlanta, since we were too worried about shipping them all safely.

Hoisted from the comments:

The thread for my post on peer review and researcher degrees of freedom is very good. For instance, Jeff Walker uses the example of his own research to articulate better than I ever have what “researcher degrees of freedom” and why merely having an a priori hypothesis isn’t enough to guard against it. This thread also shows our commenters at their wittiest. I love Steve Walker’s line about researchers who are “walking talking 20th order polynomials”. And I’m proud of my suggestion (inspired by a remark of Steve’s) that the way to do statistics well is to ask “What would Ben Bolker do?” Indeed, I’m sufficiently proud of this suggestion that I’m going to try to turn it into a meme. Share the following image far and wide, everyone! 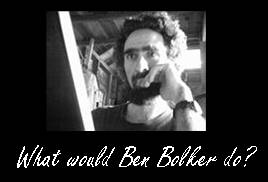 8 thoughts on “Friday links: how to do great research, what would Ben Bolker do, and more”