I am giving/gave a talk this morning at a Festschrift celebrating the 25th anniversary of the Graduate Ecology program at the Universidade Federal de Minas Gerais (UFMG), the large state university in one of the larger states/cities in Brazil. So first congratulations to the program and many thinks to the organizers (especially Marco Mello, Adriano Paglia and Geraldo Fernandes) for inviting and hosting me.

I was invited to give the talk based on my blogging, which is sort of a new trendy thing in ecology. So I foolishly offered to give a perspective on the past 25 years of ecology and what the next 25 years of ecology will contain, because I like to think about such things. But as I prepared my slides I increasingly got nervous because these are topics no one person should claim expertise on!

However, I did come up with a couple of data-driven graphics that I thought readers might find interesting.

First I did some statistics on rates of publishing by country (using Web of Science so biased to English journals). I picked out the US, several European Countries and Brazil and China. What would you guess the trends are? First, the total # of papers published per decade is increasing at a phenomenal rate, so everybody is publishing more. But as a percent of published papers, most European countries are holding steady (although some countries like Germany started to publish in English later than other countries like Sweden so they show a big increase in the 1980s or 1990s), the US is slowly declining and China and Brazil are increasing rapidly. 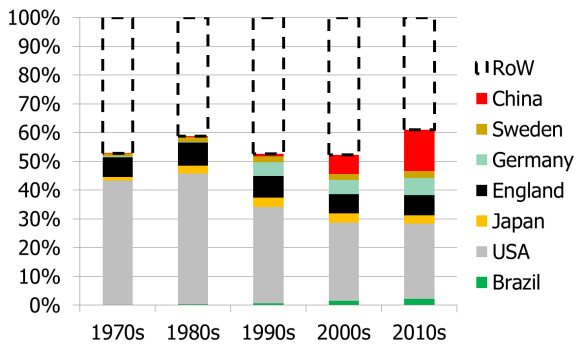 According to Web of Science which is English journal-biased. RoW is rest of world.

There are some obvious differences. But before I comment, I am curious to see what you all see (that is the point of a word cloud after all)  I hope you all will share your thoughts on what has or has not changed in 25 years (OK 23). I’ll try and add my thoughts in the comments after others have had a chance at analysis.

PS – if you’re curious you can download my slides for the talk from figshare. The first 1/3 matches what you read above. The last 2/3 mostly matches themes I’ve hit on before here in my posts on DE. Although students might enjoy the next to last slide on advice to students.