Note from Jeremy: This is a guest post by Margaret Kosmala, a postdoc in Organismal and Evolutionary Biology at Harvard.

Note from Margaret: This is the fourth post in a mini-series examining the enormous variation in U.S. postdoc leave benefits. (See first, second, and third posts.) While most postdocs do not consider benefits packages when choosing a position, the benefits available can greatly affect quality of life, and sometimes mean the difference between staying in academia and leaving it — especially for caregivers and those with chronic health conditions. I surveyed 21 U.S. universities with highly ranked ecology programs (according to The Chronical of Higher Education and U.S. News and World Report) and the U.S. federal government by looking up postdoc benefit information on their webpages, and present the data (with commentary) here. (Note that this information is up-to-date as of July 2014. Please provide updates and corrections in the comments. I also welcome data about other universities and will add them to the charts if full info is provided.)

Last time I talked about all the various vehicles universities can use to grant parental leave to (employee) postdocs. But because different universities choose different combinations of these vehicles, it’s very difficult to compare them. So I decided to use myself as an example case and see how different institutions measured up. I asked, “what if I was a postdoc at this university?” and used my real information: I started my postdoc on January 1, 2014. And I gave birth on June 9 of the same year. I intended to (and did) take three months off after the birth. I also assumed that I had taken no sick leave or vacation leave prior to birth. (Which, of course, is impossible. Between January 1 and June 9 in real life, I had eleven prenatal appointments, a dentist appointment, and a baseline appointment with my new primary caregiver.)

There were several main things I wanted to compare:

For the fourth question, I assumed that I was paid the same at every university, and picked a reasonable salary for an ecology postdoc: $42,000

The answers are pretty scary – and very variable. I’ve made a graph so you can follow along (click to embiggen). 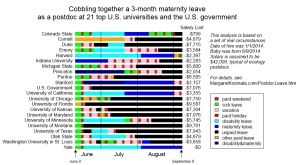 Of the 21 universities and the federal government, at only two (Yale and the University of Washington in St. Louis) could I take job-protected leave for three months. There were five more universities that got me “close enough”; these counted in weeks (12 or 13 weeks) or days (90 days) that were just short of the three months I wanted (13.1 weeks, 92 days).

At the other 14 universities and at the federal government, my leave would have had to be significantly curtailed unless I personally negotiated a longer leave. But very few universities have policies guaranteeing protected unpaid leave. Remember, I haven’t been in my postdoc position for a year yet, so I’m not covered by FMLA.

There was also a large range in the pay I would lose for having a child. Yale would ensure that I lost nothing; it was the only one to offer three months at full pay. Colorado State was next, where I lost just $800. Conversely, I would lose more than $7,000 at 7 of the universities (and the federal government). At the University of Montana and the University of Florida I would lose over $9,500 — almost a quarter of my yearly income. (No problem! It’s not like you need money to pay for the birth…)

A couple things were noteworthy: I was ineligible for maternity leave at 4 universities because I had not worked there long enough (typically a year). There need to be better policies without these waiting periods for postdocs, whose tenures at an institution are typically 2 years or less.

Also, in all cases but two (Harvard and Yale), I was forced to use all my sick and vacation leave. All of it. All sick leave. All vacation leave. (Though at the University of Montana I wasn’t eligible to use my vacation leave because I hadn’t been there six months yet.) That means that at most institutions, I have no leave reserves left to take the time off I *will need* for my baby’s four-, six-, and nine-month doctor appointments for vaccinations, not to mention any I need to take off if I become sick, one of my children becomes sick, or, heaven forbid, I want to visit my family over the holidays so they can meet their new relative. Cornell and Indiana University should be commended for having a formal “sick-leave-as-needed” policy. At a couple places I had to use leave from two fiscal years to try to meet my three-months off after birth; at the University of Washington in St. Louis and at Colorado State, I wouldn’t be eligible for any more leave (sick or vacation) until July of 2015 — more than a year after I gave birth! At five more, I must wait until January 2015 to get any more leave.

Let me make this crystal clear: at the majority of universities (and the federal government), even if I’ve made it through my maternity leave and kept my job, the fact that I have no leave reserves means that my job is in jeopardy if I must miss work for one day to vaccinate my baby, stay home because I’ve got the flu, or need to take my baby to the doctor or hospital due to disease or injury.

How does your university stack up?