Although the notion “bandwagon” technically only means something that is rapidly growing in popularity, calling a scientific research program a bandwagon  carries several more connotations. These include the idea that it will crash (people will abandon it) and that people are piling in because they perceive the research program as a way to do something that is “easy” (or even formulaic) but still get in a good journal (i.e. the proverbial something for nothing). Popular and easy are of course two of the worst reasons to choose a research project, but that seems not to matter in the bandwagon phenomenon.

There is little doubt that functional traits are a bandwagon research program right now: 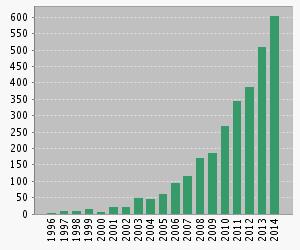 The use of the phrase “functional trait*” (per Web of Science) is rising exponentially with a doubling time of less than 4 years. In less than two decades, there are almost 3000 total publications cited 56000 times, 14000 times last year alone (with an astonishing average citation rate of 19 times/article and an h-index for the field of over 100).

For better and worse, I am probably one of a fairly large group of people responsible for this bandwagon due to this paper which came out simultaneously with a couple of other papers arguing for a trait based approach, although (as likely true of all bandwagons)  the idea has been around much longer and builds on the research of many people.

By calling functional trait research a bandwagon, I am implying (and now making explicit) two things: 1) The popularity of the functional trait program is in part due to the fact that people see it as a simple way to do something trendy. I think there is no doubt of this – there are a lot of papers being published right now that just measure a bunch of functional traits on a community or guild and don’t do much more. 2) That this party is about to come to an end. I predict we will see multiple papers in the next two years talking about how functional trait research is problematic and has not delivered on its promise and many people bailing out on the program.

You might think I am worried about the impending crash, but I am not. I actually relish it. Its after the bandwagon crashes that we lose all the people just looking for a quick paper and the people who are really serious about the research field stay, take the lessons learned (and identify what they are), build a less simple, more complex but more realistic, productive world view. In my own career I have seen this with phylogenetic systematics, neutral theory of biodiversity, and – if we go back to my undergraduate days – neutral theory of genetics and island biogeography.

In an attempt to shorten the painful period and hasten the renewal, what follows are my ideas/opinions about what is being ignored right now on the functional trait bandwagon (although by no means ignored by the researchers I expect will still hang around after the crash and I have tried to give citations where possible), which I predict will become part of the new, more complex view of functional traits version 2.0 in 5-10 years down the road.

(As an aside – I wanted to briefly note as a meta comment on how I think science proceeds, that: a) I think probably many other people are thinking these thoughts right now – they’re in the air, but as far as I know nobody has put them down as a group in ink (or electrons) yet and b) my own thinking on this has been deeply influenced by at least a dozen people and especially by Julie Messier as well as Brian Enquist & Marty Lechowicz – more full acknowledgements are at the bottom c) its not as easy to assign authorship on these thought pieces as it is on a concrete piece of experiment or analysis – if this were a paper I could easily argue for just myself as author or 1 more or 3 more or 10 more)

So without further ado, here are 9 things I think we need to change to steer the bandwagon:

So there you have it. If you want to predict outcomes (e.g. invasion, abundance, being found at location X or in environment Y, and etc) based on traits, its easy. You just have to recognize that it happens in interaction with the environment and many other traits (many of which we haven’t even started studying) and figure out what the appropriate level of traits to study for the scale of the question. Sounds easy right? No, of course not. When is good science ever easy? That’s the problem with bandwagons. Anybody want off the trait bandwagon before we get to that destination? Anybody want on if they know that is the destination?

What do you think? Are traits a bandwagon? Is it about to crash? What will be the story uncovered by those picking up the pieces? Anything I forgot? Anything I should have omitted?

PS – I don’t usually do acknowledgements on informal blog posts, but it is necessary for this one. My thinking on traits has been profoundly influenced by many people. First among them would be Julie Messier who is technically my student but I am sure I have learned more from her than vice versa. And she currently has shared with me several draft ms that make important progress on #2, #4 and #5. I also have to highlight my frequent collaborators, Marty Lechowicz and Brian Enquist. Also influencing me greatly at key points are Cyrille Violle, Marc Westoby, Evan Weiher. And this field is advancing by the work of many other great researchers (some of whom I’ve mentioned above) who were there before the bandwagon started (and many before I got on) and will still be there after it crashes but whom I won’t try to name for fear of leaving somebody out. Despite it being a bandwagon right now, there is no lack of smart people trying hard to steer constructively!

54 thoughts on “Steering the trait bandwagon”