Over the past couple of years, we’ve made a lot of big changes to the Intro Bio course here at Michigan. I think we can demonstrate they’ve been really successful at improving student learning, but one downside of those changes is that I’ve worried that too much organismal diversity was cut. So, I decided to add in having an Organism of the Day, stealing the idea from my postdoc advisor, Tony Ives. I know that students in Tony’s class love the OotD, and thought it would be fun to add it in to my course.

Was it a success?

I’d say it was sort of successful, sort of not. It succeeded in introducing more different types of organisms and helped me cover things that I thought were important to cover. But I think most students viewed them as just another thing to learn, in a class that already covers a lot of material (despite my attempts to cut back each year). While I know that some students liked the OotD, my general impression (though I don’t have specific data on this) is that most were not excited about them. That was disappointing.

First, let’s back up. Who were the organisms of the day? They were:

I had a lot of fun doing the readings about the organisms, deciding which to include for which lecture, and preparing the materials on them. And I was expecting that students would like them, too, but, as I said, I think most students viewed them as yet another thing to learn. Was that true? I’d say no, but student perception is certainly important, and I think they’d disagree.

Why the disconnect? Well, in about half of the cases, the OotD was already covered when I taught the year before, just not flagged as special. So, in those cases, I didn’t add material (or, if I did add something, it wasn’t much). In the other cases, sometimes it was something extra that was more for fun, and other times it was something new but that covered something that I felt had been lacking. Trichodesmium is a great example of the latter. In my attempts to convey to students the difference between Rhizobium and mycorrhizae (which they seem to have a very hard time with), it became clear in Fall 2014 that I had left many students with the impression that all nitrogen fixation on Earth is by rhizobia. Whoops! So, I added in Trichodesmium as an organism of the day. While it’s true that that was new material, it’s material that I would have added even if I wasn’t doing the organism of the day, since I wanted them to realize there’s nitrogen fixation in the oceans, even though there aren’t legumes!

Another reason why I think the students viewed it as just more stuff to learn is that, leading up to the first exam I gave, I received multiple questions from students about whether organisms of the day would be tested on the exam. Initially, my inclination was to say that they only needed to know the OotD to the extent indicated in the learning objectives (which indicate the concepts they should know). But I knew I had written this question for the exam: 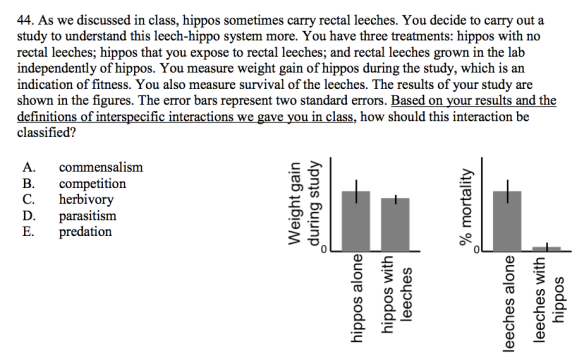 From my perspective, this question could have been written about any two organisms (including two that I made up), but was more interesting to write about hippos and their rectal leeches, so that’s how I did it. To me, this question is asking them to interpret a figure showing data they’ve never seen before*, in the context of what they’ve learned about interspecific interactions. (In this case, the leeches benefit and there is no detectable effect on hippos, making it commensalism.) But, to many students, this question is about hippos and their rectal leeches. So, I ended up deciding to say that, yes, students did need to know about the OotD, so they wouldn’t feel they’d been led astray on the exam.

What will I do next time? I’m not sure. Right now, I’m inclined to leave in most of the OotD material, but to not flag is as such. That would let me still cover the topics I wanted to cover without it seeming like I’m adding in something extra. But I’m still not sure. As I said above, I know that some students did really like the OotD. And, in some cases, I know the students didn’t like the OotD because they were not vertebrates; I’m fine with having students think more about things other than vertebrates, even if they aren’t always happy about that.

So, the Organism of the Day was not the resounding success I hoped it would be, but it also wasn’t a total failure. I’m disappointed that it wasn’t a bigger success, but am reminding myself that sometimes, when I try something new in the classroom, it’s bound not to work (at least not on the first try) and that’s okay. It will be interesting to think about how to change things to try to make it more successful. If you’ve used a similar approach, I’d love to hear what you think made it work (or not)!