In comments recently, Jeff Ollerton asked an interesting question: why does scientific interest in certain topics take off suddenly, while interest in others builds over an extended period? You might think it would have something to do with a key triggering event, such as publication of a pathbreaking paper or book, prompting a step change in interest in the topic. Sometimes that happens. But in other cases it’s not clear why some bandwagons get rolling quickly while others take time to build momentum.

(Aside: for purposes of this post, “bandwagon” just means “topic lots of people work on”. No negative connotations.) 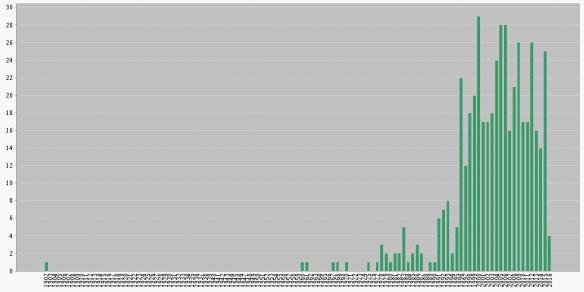 The number of papers on pollination ecology in the leading journals publishing on that topic jumped suddenly in 1991 for no obvious reason, though the number of papers grew steadily both before and after that as well. The figure below is from Jeff Ollerton’s post on this: 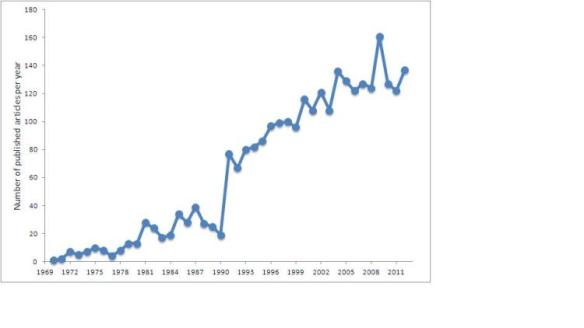 Simon Leather suggests that interest in beetles feeding on dead wood took off rapidly, either without any obvious trigger or as a very delayed reaction to some trigger. But I’m not so sure, I’d call it more of a gradual takeoff rather than a step change. You be the judge: below is Simon’s data on the number of papers per year in all journals on “saproxylic” or “saproxylic beetles”:

Interest in eco-evolutionary dynamics has grown fast since what I would guess was the triggering event (the work of Nelson Hairston Jr., Steve Ellner, and colleagues), but there’s no obvious step change, at least to my eye:

Interest in macroecology has an obvious triggering event: Jim Brown’s 1995 book. But the annual number of papers on the topic in leading fundamental ecology and general science journals grew more or less linearly for almost a decade before plateauing at 30-40ish papers/year. Unless you want to argue for a step change in 2007 maybe?

The annual number of papers on mesocosms has been growing steadily for over 20 years with no plateau in sight. But this might be bad data. Henry Wilbur, Peter Morin, and others would doing what would now be called mesocosm work back in the 70s and 80s, but apparently without using the term “mesocosm”. Well, either that, or we’re running up against the limits of Web of Science records, which don’t record abstracts that far back.

Interest in the Moran effect dates from Royama’s classic 1992 book, Analytical Population Dynamics. But it didn’t trigger a sudden burst of publications. Rather, interest has grown steadily-ish since 1992, with no sign of a plateau (though you could argue for a sudden jump in 1999 too):

Your mileage may vary on whether there was a sudden jump in interest in metacommunities in the wake of the Leibold et al. 2004 review of metacommunity theory, or whether it was more like stochastic exponential growth from the late 90s to the mid-oughts.

After this exhaustive* research, it looks to me like true step changes in interest in a topic are fairly rare, at least as manifested in the publication record. No doubt that’s in large part because, even if a bunch of people suddenly become interested in a topic, they’re not likely to all suddenly publish on it at exactly the same time. Which makes the rare step changes like microcosms and pollination ecology all the more striking.

It would be interesting to compare the growth rates of interest in various topics. If you were doing it right, you’d also want to correct for growth in the overall literature, which I haven’t bothered to do here. It’d also be interesting to compare how long growth is sustained. I’m struck that interest in some of these topics has grown steadily for decades, whereas others plateaued in a decade or less.

12 thoughts on “Why do some bandwagons in ecology get rolling much faster than others?”