A little while back I polled y’all on your views on who should get to be an author of a scientific paper, and on author contribution statements as a way of apportioning credit and responsibility for scientific papers. Here are the results on authorship, which I find quite interesting. There’s a fair bit of disagreement! I’ll post results on author contribution statements in a follow-up post.

We got 246 respondents. Not a random sample of any well-defined population, obviously, except maybe the population of “regular readers of this blog”. But a sufficiently large and diverse sample to be worth talking about, I think. Certainly a bigger and more representative sample than any one person’s own anecdotal experiences. Which is what I find interesting about these polls–contrasting the results with my own anecdotal experiences.

Respondents comprised a good mix of career stages: 25% grad students, 36% postdocs, 32% faculty, 6% professional non-academic scientists. Just a couple of respondents in other categories. That’s low on grad students compared to old reader surveys–maybe the students are all out in the field?

Respondents mostly do ecology (60%), or a mix of ecology and evolution (26%). They’re from around the world, and their distribution roughly matches where our pageviews come from, except that we were a bit low on Canadian respondents: 53% USA, 23% non-UK Europe, 8% UK, 7% Canada, the rest elsewhere. They mostly do basic research (39%), or a mix of basic and applied (48%). They come from a mix of departments: Biology (33%), EEB (22%), Nat Res/Wildlife/Forestry/Fisheries (18%), or other departments (21%) and non-academic employment (5%).

One view of authorship is that you need to make an independent intellectual contribution to a paper to be considered an author. See, for instance, Ecology Letters’ authorship policy, which reads in part:

All authors are expected to make a substantial intellectual contribution to a manuscript. Honorary authorships are discouraged: merely providing facilities, obtaining funding or heading a research group that houses authors are not sufficient reasons for authorship, nor is provision of a small amount of data collected primarily for purposes other than those in the manuscript.

As another example, the Ecological Society of America journals oblige authors to adhere to the ESA Code of Ethics, which says that authors must make a “substantial contribution” to the paper, and says authorship may legitimately be claimed if researchers

Hence my first poll question, which asked readers whether various contributions–including those listed in the Ecology Letters authorship policy–are sufficient on their own for authorship. Here are the results (note that bar labels only summarize the contributions as they were described in the original poll): 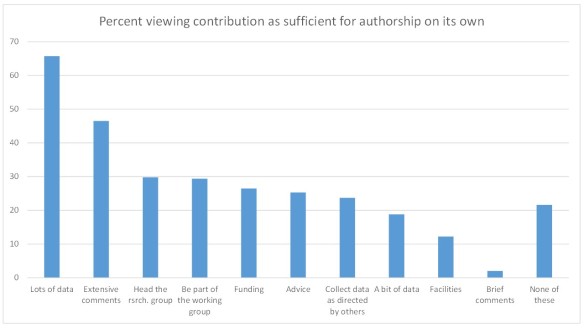 One particularly striking feature of these results: a sizable majority of respondents think that, if you provide lots of data originally collected for another purpose, you should be an author. Whereas only a minority–about 24%–think you should be an author if all you do is collect the data as directed by others. Which seems really weird to me! So if you collect lots of data originally for some other purpose, that probably makes you an author, but if you collect lots of data originally for the purpose of the paper, that probably doesn’t make you an author? How does that make sense? Anyone else puzzled and bothered by this aspect of the results? Am I reading too much into them?

I’m also surprised that only 29% of respondents said that it was sufficient for authorship to be part of the working group that conducted the work. I had thought it was standard practice for working groups to agree up front that all participants will be co-authors on all of the group’s papers?

Looking at the crosstabs, there weren’t any strong predictors of respondents’ views on which, if any, of the listed contributions merit authorship. Faculty and students had similar mixes of views. So did Americans and non-Americans. Etc.

The results above imply that a majority of respondents disagree at least in part with the authorship policies of journals like Ecology Letters and the ESA journals. But of course, not all journals have authorship policies, and those that have them have different policies. For instance, Nature “does not prescribe the kinds of contributions that warrant authorship“, and BES journals have no authorship policy I could find. Further, journals don’t have any means of enforcing their authorship policies, because their only source of information as to who should be listed as an author is the authors themselves. So it’s perhaps unsurprising that respondents varied a lot in their awareness of and attitude towards journal authorship policies. Only 17% said they take account of journal policies when deciding authorship on their papers; 23% said they don’t. 28% said they ignore journal policies because those policies just codify what they’d do anyway. 24% were unaware if the journals to which they submit have policies, or were unaware of what the policies are. The remainder gave other responses.

Comparison with a previous survey of ecologists

Weltzin et al. 2006 Front Ecol Envi informally surveyed 57 attendees at the 2004 ESA meeting as to who should be an author in each of six hypothetical scenarios. They got widely varying responses to many of their scenarios. For instance, 25% of their respondents thought that, if pers0ns X and Y develop and conduct a project building on ongoing work of colleague Z, to which Z contributes only by attending a few meetings at which analytical methods are discussed, Z should be an author.

I confess, it’s a little harder for me to get too worked up over disagreement about authorship order conventions now that I know there’s so much disagreement over what constitutes “authorship” in the first place!

I used to think that authorship contribution statements were an obvious if imperfect solution to this (since they don’t state the contributions of non-authors). But for more on that you’ll have to wait for part two of the poll results…

Looking forward to your comments, as always.