Last spring, I did a poll related to authorship order in ecology. I’ve written up a couple of posts presenting the results of that poll (part 1, part 2), and plan on writing more. But, for now, I want to focus on some . . . less standard ways of deciding authorship for ecology and evolutionary biology papers.*

It all started with this tweet (which makes me also want to write a post with best opening lines of ecology & evolution papers — give suggestions in the comments!**):

My reply to that was that there’s another Hairston & Hairston paper (1993 AmNat) where authorship was determined alphabetically:

I realize that it’s not that uncommon for folks to alphabetize authorship order, but it probably doesn’t usually require getting to the 21st letter of the name to break the tie!

Authorship determined by basketball skills is certainly an early contender for most fun way of determining authorship order. That led me to ask on twitter for other examples . . . which got lots of replies!

(Is croquet an athletic pursuit? Whatever, I’m sticking with it.)

Or the more modern version:

However, sometimes geography makes a coin flip difficult, in which case authors use more creative approaches, as in the case of Feder & Mitchell-Olds (2003, Nature Reviews Genetics) (ht: Stephen Heard, in his book on writing) 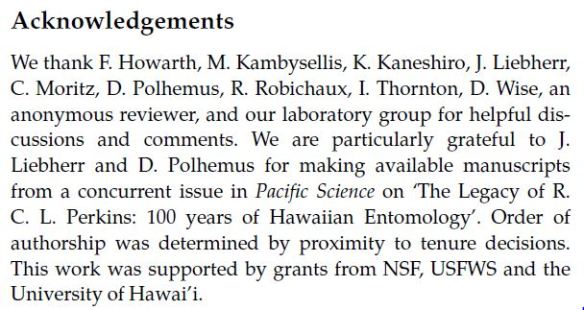 And then there’s the chance to use game theory to figure out authorship order, as done by Riechert & Hammerstein (1983 Annual Review of Ecology & Systematics). (ht: Don Schoolmaster)

Or, one could go with the rock-paper-scissors approach, as used by Kupfer et al. (2004 Agriculture, Ecosystems & Environment) (ht: Stephen Heard, in his book on writing)

But all the ones above pale in comparison to this one by Young & Young (1992 Ecology):

That’s right: a brownie bake-off! (ht: Robin Choudhury, Ryan McEwen, Don Yee) The competition is over, folks! Clearly this is the best way to determine authorship order, and I’m happy to volunteer to judge these competitions, as a service to the field. Though, I fully agree with Jeff Hollister’s call for open science on this one:

Of course, even once you’ve determined authorship order, there are still other questions related to authorship that might need to be addressed.*** It turns out that, if you feel your coauthors didn’t pull their weight, you can address that with a footnote, too, as done by Hendry et al. (2013 Evolutionary Ecology Research).

If you know of others that I missed, please let me know!

Right as I finished this post, I learned (thanks to being tagged into a conversation on twitter by Stephanie Carlson) that a banjo played a key role in determining the order of authorship of Hilborn & Mangel’s Ecological Detective (which was one of the most popular responses in Brian’s poll of favorite ecology books). The story is told in a piece by Hilborn:

It is a very nice banjo!:

which isn’t on ecology and/or evolution, but does have this excellent footnote related to authorship:

Sometimes the most time consuming part of writing a paper is determining the order of authorship. pic.twitter.com/8Z0cfFFw7C

In addition to having a very clear title, this paper by O’Hara & Kotze has an excellent means of deciding author order (ht: Paul Johnson):

This one is much less fun: a paper in Genes, Brain, and Behavior was recently retracted because of a dispute over author order. From the retraction notice “The retraction has been agreed as all authors cannot agree on a revised author order, and at least one author continues to dispute the original order. In this case, the original article is being retracted on the grounds that the journal does not have permission to publish.”

The authors (Lakens, Scheel, and Isager) of a study in Advances in Methods and Practices in Psychological Science shared the code they used to determine author order!

This paper by Myra Shulman (my undergrad evolution prof!) and Eldredge Bermingham had author order determined by an arm wrestling competition! (ht: @collins_noaasi via twitter)

The authors of this new paper by Rochman et al. on microplastics called in a furry assistant to help determine authorship order. I fully support this approach, and hope that Bear got belly rubs and treats after all that hard work. (ht: Alex Bond)

and it’s even better when you see the picture of Bear in action!

I was interested to learn that alphabetizing authors can do a disservice to those whose names lie at the end. To solve this problem, we let a dog randomize our author order via the order in which he ate treats!! Then of course we acknowledged the dog here: https://t.co/iEWuUJNkgH pic.twitter.com/BAgyhw1Vef

* After starting this post, I learned about this compilation by Sylvain Deville (ht: Jeremy) and this one from Academia Obscura (ht: Stephen Heard)

** An obvious follow up to that would be one focused on acknowledgments sections. There are definitely some good acknowledgments out there. Suggestions for those are also encouraged!

*** And then there are the questions of interesting (co)authors, such as Student (really William Sealy Gosset) and F.D.C. Willard (who was actually a Siamese Cat named Chester; ht: Rebecca Clark)