Last winter, I did a poll asking about preferences related to the number of times people prefer to teach a particular course. Embarrassingly, I never got around to writing up the results post, even though I think the results were interesting! So, in the spirit of better-late-than-never, here are the results!

tl;dr: Most people prefer to teach the same course over and over and over again. Those preferences don’t seem to change much over a career, but, if they do, they are more likely to move in the direction of preferring to teach a particular course fewer times. Faculty in teaching-intensive positions reported having less control over what they teach and were less likely to say they are happy with their teaching assignments in the past three years (as compared to faculty not in teaching intensive positions); a key driver of that is department teaching needs.

Preferred number of times to teach a course

When asked “What is your preferred number of time to teach a course”, most of the 125 respondents prefer to teach the same course over and over again (32.8% as many times as possible, 24% 5-6 times): 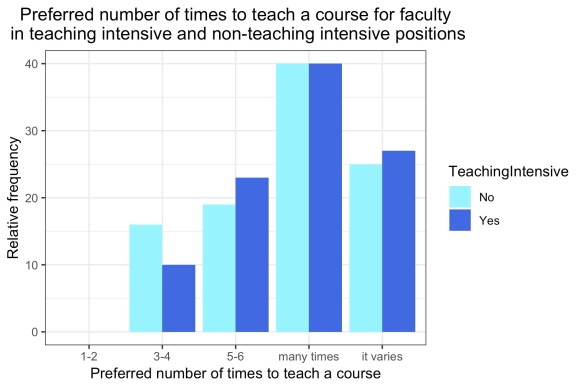 It’s not surprising that no one chose 1-2, but I was surprised the 3-4 wasn’t higher (since I feel like I’ve heard a decent number of faculty express that as their preference over the years).

Preferences as a graduate student

Do preferences change over a career?

When asked if preferences have changed over their career, of the people who have held a faculty position long enough to have an opinion, most respondents said their preferences hadn’t changed much. The next most common was that they now prefer to teach an individual course less often than they used to, followed by preferring to teach an individual course more often than they used to.

I subsetted the data to just look at tenured faculty. 57% of those respondents indicated their preferences haven’t changed much. 23% said they now prefer to teach an individual course less often than the used to.

How much control did poll respondents feel they have over what they teach? 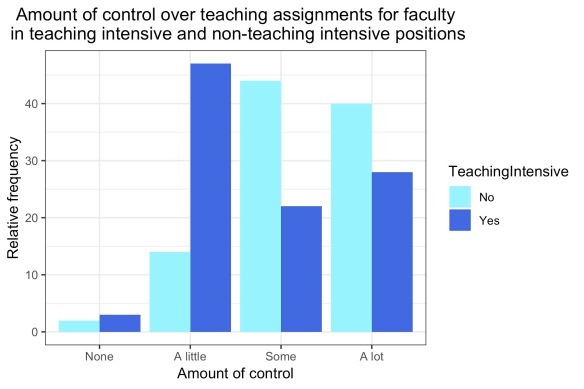 Why are people not in control of what they teach? Looking just at the faculty responses, half of the respondents in teaching-intensive positions chose “I’d like to change to a new course, but can’t because of department teaching needs”, whereas only 30% of faculty in non-teaching intensive positions chose that. I’m not sure if I’m surprised that the difference isn’t greater. I think the main thing I’m surprised by is that the percentages for both groups isn’t higher.

Again, looking just at the faculty responses, only 22% of teaching-intensive faculty chose the “None of the above; I’ve been happy with my teaching in the past 3 years” option, vs. 60% of faculty in positions that are not teaching intensive.

I don’t think there were any major surprises in the poll results, but I still found them interesting. Most people prefer to teach the same course over and over and over again. I was a little surprised that more people didn’t view 3-4 times as the “right” number, but, given the very substantial amount of work required to develop a course, I think it makes sense. I also personally don’t feel like the course feels stale the more I teach it. I wonder if there are disciplinary differences in that? I think it’s both a blessing and a curse that there’s so much interesting new material to include in Intro Bio every year – it’s great because it keeps things fresh and up-to-date, but less great because it creates a lot of extra work (more than it seems like it should!)

I’d be curious to know whether readers were surprised by any of the results and if the general patterns match reader experiences. Please let us know in the comments!