There is a belief that dropping a frog into hot water will cause it to react and immediately jump out, while putting it in a pan of cool water and slowly warming will cause the frog to never notice until it is boiled. Here in Maine you hear the same debate about how to cook a lobster. Whether the frog myth is true or not is debatable (although it is clearly sadistic). But it has become a common metaphor for failing to notice or respond to small incremental changes which when taken in the aggregate are terrible (fatal in the case of the frog). We seem to have a bit of the same thing happening with the primary basic science funding agency in the US (the National Science Foundation or NSF). In this piece I want to a) argue that due to macro trends not the fault of NSF, the agency and their researchers are in a frog-boiling scenario, and b) attempt to kick-start an out-of-the-box big picture discussion about what should be done about it (akin to the frog realizing it needs to take bold action and jump out of the pot).

But first, I’ve already said it, but let me repeat it to be abundantly clear. This is NOT a criticism of NSF. Every single program officer I’ve ever dealt with has been a highly dedicated and helpful professional (not to mention they are also researchers and one of us), and NSF regularly gets rated by government auditors as one of the most efficient and well run branches of the government. Instead, these trends are being driven by macro trends beyond the control of NSF (or of us researchers). I’m sure NSF is just as aware of and unhappy about these trends as I am. I expect they also are having discussions about what to do about it. I have not been privy to those discussions and have no idea whether NSF would welcome the discussion I am promoting here or not, but I feel like this blog, with its tradition of civility and rational thinking might be a useful forum.

I am going to focus just on the environmental biology division (DEB), although I don’t think the story differs much anywhere else. I haven’t always been able to obtain the data I would like to have, but I’m pretty confident that the big picture trends I am about to present are quite accurate even if details are slightly off. The core, graph, which I’ve seen in various versions of NSF presentations for a while (including those to justify the switch to the preproposal process) is this: 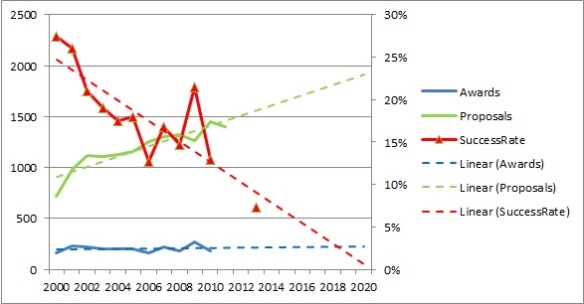 Trends in # of proposals submitted (green), # of proposals funded (blue), and success rate (red). This data is approximate (eyeball scanned from http://nsfdeb.wordpress.com/2013/03/11/deb-numbers-revisiting-performance-of-pi-demographic-groups-part-1/ provided by NSF). Linear trend lines were then added.

This graph confirms what NSF has been saying – the number of proposals submitted keeps going up without any sign of stopping while the number of proposals actually funded is flat (a function of NSF funding being flat – see below). The result is that the success rate (% of proposals funded) is dropping. But adding trends lends and extending them to 2020 is my own contribution. The trend in success rate is here actually an overestimate due to the stimulus year in 2009 which was left in. According to a naive, straight line trend, success rate will reach 0% somewhere between 2019 and 2020! Of course nobody believes it will reach 0% And the alternative approach combining the other two trend lines gives roughly 200 proposals funded out of 2000 for 10% in 2010. But the trend line is not doing a terrible job; when I plug in the 2013 number from DEB of 7.3%* it is not that far from the tend line (and is already below the 10% number). Nobody knows what the exact number will be, but I think you can make a pretty good case that 7.3% last year was on trend and the trend is going to continue going down. A few percent (2%?) by 2020 seems realistic. All of this is the result of inexorable logic. The core formula here is: TotalBudget$=NumberProposals*Accept%*GrantSize$

NumberProposals is increasingly rapidly. Although harder to come by data on, my sense is that GrantSize$ is roughly constant (at least after adjusting for inflation) with good spread but a median and mode right around $500,000. Maybe there is a saving grace in TotalBudget$? Nope:

NSF appears to have had four phases – exponential growth in the early days (1950-1963), flat from 1963-1980. Strong growth from 1980 to about 2003. And then close to flat (actually 1.7%/year over inflation) from 2003-2013 (again a stimulus peak in 2009). Note that the growth periods were both bipartisan (as was the flat period from 1963-1980). Positive growth rates aren’t terrible and congratulations to NSF for achieving this in the current political climate. But when pitted against the doubling in NumberProposals, it might as well be zero growth for our purposes. It is a mug’s game to try to guess what will happen next, but most close observers of US politics expect since the debate has shifted to a partisan divide about whether to spend money at all and a resignation that the sequester is here to stay are not looking for big changes in research funding to come out of Congress anytime soon (see this editorial in Nature). So I am going to treat TotalBudget$ as flat line and beyond the control of NSF and researchers.

The number that probably deserves the most attention is NumberProposals. Why is this going up so quickly? I don’t know of hard data on this. There is obviously a self-reinforcing trend – if reject rates are high, I will submit more grant applications to be sure of getting a grant. But this only explains why the slope accelerates – it is not an explanation for why the initial trend is up. And there is certainly a red-queen effect. But in the end I suspect this is some combination of two factors: 1) the ever tighter job market (see this for a frightening graph on the ever widening gap between academic jobs and PhDs) which has led to ever higher expectations for tenure. To put it bluntly, places that 20 years ago didn’t/couldn’t expect grants from junior faculty to get tenure now can place that expectation because of the competition. and 2) as states bow out of the funding of their universities (and as private universities are still recovering from the stock crash), indirect money looks increasingly like a path out of financial difficulties. Obviously #1 (supply) and #2 (demand) for grant writing faculty reinforce each other.

So to summarize: TotalBudget$=NumberProposals*Accept%*GrantSize$. TotalBudget$ is more or less flat for the last decade and foreseeable future. NumberProposals is trending up at a good clip due to exogenous forces for the foreseeable future (barring some limits placed by NSF on number or proposals). So far GrantSize$ has been constant. This has meant Accept% is the only variable to counterbalance increasing NumberProposals. But Accept% is going to get ridiculously low in the very near future (if we’re not there already!). Part of the point of this post is maybe we need to put GrantSize$ and NumberProposals on the table too.

Some salient facts for a discussion of what to do

In the next section I will list some possible solutions, and hopefully readers will contribute more, but first I want to highlight two very salient results of metaresearch (research about research).

Just to repeat this is not a criticism of NSF. The exogenous drivers are beyond anybody’s control and simple budgetary math drives the rest. There is no simple or obvious answer. I certainly don’t have the answer. I just want to enumerate possibilities.

I am really curious to see which approach(es) people prefer. I will save my own opinions for a comment after most votes have come in. But I definitely think it is time for the frogs (us) to jump out of the pot and take a different direction!

59 thoughts on “Are US researchers slowly boiled frogs? – or thinking out of the box about the future of NSF”