Do a few Google image searches for “scientist”, or for specific scientists, or just look at some lab websites, and you’ll find that the pictures run to type. Lots of shots of scientists in the lab or at their field site, or with some obvious stand-in for their lab or field site. For instance, here’s

Jane Lubchenco in the rocky intertidal,

Jane Lubchenco in her natural habitat.

Rees Kassen with a petri plate and a colony counter, 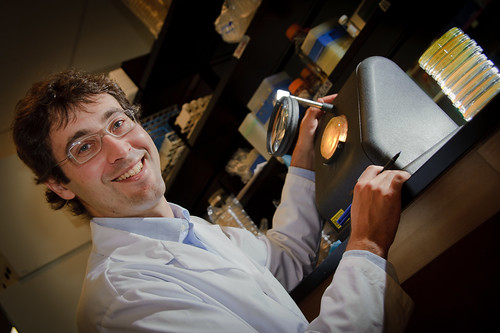 Rees pretending he still remembers how to count his own colonies. (Just kidding Rees!)

and Robert Oppenheimer with a chalkboard full of equations.

Then you carry the two…

And judging from a Google image search, it’s apparently the law that E. O. Wilson can only be photographed with a statue of an ant.

The conventional nature of these images is understandable. The whole point of a photo of a scientist is to convey some sense of what they work on. But effective as images like the above are, they’re not very creative. I prefer images that are just as effective, but more visually imaginative.

How about a fisheye lens to jazz up that conventional scientist-standing-in-lab shot?

Shooting in black and white smartens up what would otherwise be a pretty conventional shot of an ecologist talking to students at a field site:

My former labmate Timon McPhearson, urban ecologist at the New School, making ecology look even cooler than it actually is.

More imaginatively, why does the scientist’s study system have to be the background? Why can’t it be the foreground?

My friend Bill Nelson, theoretical ecologist at Queen’s University, looking AWESOME. Seriously, I am so jealous of this shot it’s not even funny.

Peggy Farnham, biochemist, USC. This is awesome too.

The setting or object illustrating the scientist’s study system can be chosen more creatively. This is risky–the resulting image might not work–but nothing ventured, nothing gained.

Lord Robert May, posing with a Tasmanian wolf to illustrate his work on extinction.

Richard Dawkins. I don’t agree with his aggressive brand of atheism, but I like this image as a commentary on his atheism.

Allegra LeGrande, who works on glaciers, in the “climate models” calendar I’ve linked to in the past (climatemodels.org). I actually find most of the shots too corny and photoshopped-looking to be effective. But your mileage may vary, and I give them points for imagination.

Bob Paine with a whole pile of Pisaster, rather than just one or two.

Michigan State postdoc Zachary Blount saying to Bob Paine “That’s not a pile. THIS is a pile.”

The scientist doesn’t have to just stand there and smile, either. That previous shot of Robert Oppenheimer is nice, but it couldn’t be more conventional. I much prefer this shot of him: Philippe Halsman’s iconic shot of Robert Oppenheimer jumping. Oppenheimer decided on his own how to jump, and denied that he was trying to symbolize striving for discovery or anything like that. He said he was just reaching. But of course, Oppenheimer’s own intent doesn’t dictate how the image reads to viewers.

Tell me this isn’t better than all those shots of Einstein just staring at the camera showing off his hair.

Finally, my casual googling failed to turn up any interesting group shots of scientists. Best I found was this image, which I think is famous in paleontological circles:

Syndics of the Cloth Guild (1662). Have I mentioned that Rembrandt was good?

Night Watch (1642). Somebody ought to do something like this for a field crew preparing for the day’s work or an NCEAS working group or something. Except without all the weapons. Presumably.

In the comments, share links to your favorite pictures of scientists, especially ones that play with or defy the conventions of the genre. (UPDATE: our commenters came through, as they always do! See the comments for a great shot of Charles Elton on a motorcycle with a bag full of mousetraps!)

p.s. Shameless self-promotion alert: the University of Calgary photographer took this shot of me for a story about various Darwin-related events I organized back in 2009. He put some thought into how to represent Darwin visually, and eventually came up with what I think is a nice variant on the “academic sitting in an office surrounded by books” genre:

Me leaning on some of my Darwin-related books. The book on top is my old (late 19th century) copy of the Origin. I’m still jealous of that shot of Bill Nelson, but I do like this one. 🙂