Recently, we did a poll asking about parental or other family leave and CVs. It was prompted by both a blog post by Athene Donald, who argues that people should include leaves on their CVs and an email from Tess Grainger who asked:

Is there is any evidence of bias related to parental leave, or it a thing of the past? How many people have been on a search committee (recently) in which someone indicated any kind of negative bias associated with a parental leave (or leave for illness, eldercare etc.)? Is this something that still happens, or should I and others not hesitate put these leaves in our records?

Poll results are below, but the brief answer to Tess’s questions seems to be that listing parental leave on a CV is unlikely to have a big impact but, if these poll responses are indicative of the field as a whole, listing leave seems more likely to help than to hurt. In many countries, applicants are already given specific guidance on when/where/how to list leaves on CVs. At the end of this post, I call on North American search committees (especially those in the US, where we are way behind on this front) to start routinely giving applicants the opportunity to list leaves, career interruptions, and major life events.

After filtering the responses to only include ones from people who have served on at least one award or faculty search committee, there were 67 responses. Of those, only 2 (3%) reported hearing someone overtly express a negative reaction to someone listing parental leave (or other family leave) on their CV. In contrast, about half of all respondents (52%) reported hearing at least one person overtly express a positive reaction: 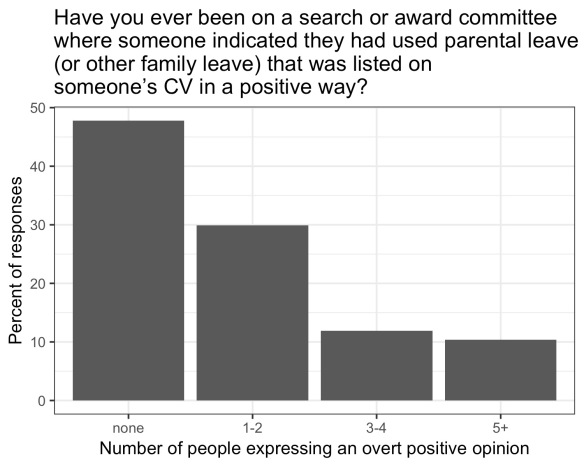 The results were similar for the questions about positive and negative impressions. Only one poll respondent reported leaving a meeting feeling like someone listing parental leave (or other family leave) on their CV impacted the committee’s outcome in a negative way (e.g., led to someone not making a short list). And, once again, about half of all respondents (45%) reported leaving at least one meeting with the feeling that it impacted the outcome in a positive way. Again, respondents who did not report experience in the US or Canada were somewhat more likely to report positive impressions:

When asked “If you have ever been on a search or award committee where committee members expressed opinions about the practice of listing parental/family leaves on a CV, what did you feel was the dominant opinion?”, the responses were:

Okay. Based on all that, I’d say my impression is that listing parental or family leave on a CV might not have a big impact but, if these poll results are representative of views on/responses to listing such leaves, doing so is more likely to help than to hurt.

Let’s move on to what people actually do in terms of their CVs. About half of all respondents said they did not list it on their CVs, either because it was not relevant (27%) or even though it was relevant (26%). Of those who did list it, the most common places were in the “Professional appointments” section or in its own section (e.g., a “career interruptions” section). In the open-ended response question, one person pointed to Franciska de Vries’s CV as a model for listing leave. (She lists it in the “Appointments” section.)

One respondent pointed to this Science piece where Emily Nicholson talks about how she edited her CV to discuss parental leave and help committees take it into account, and another said that, when they are on committees, they like it when people do the sorts of calculations that are recommended in that Science piece. (Here’s another example of accounting for career breaks on a CV.) In the comments of this post, I’d be interested in hearing what people think of this approach. If you’ve been on committees, would you have found these sorts of numbers useful? I have no idea how I would calculate them for myself, but much of that is based on being in the US (more on that below).

The poll was done from the perspective of it being up to an individual to decide whether or not to report, ignoring the potential for search or award committees to give explicit guidance about how people should take leaves into consideration. However, there was a lengthy discussion in the comments on the poll post focused on ways committees can explicitly provide opportunities for people to share information about leaves. The comment thread started with a comment from Brian (based on a twitter reaction) who reported recently reviewing a grant proposal that included these instructions:

Sue Baker reported (and others confirmed) this for Australia:

The Australian Research Council actively encourages [listing leaves on CVs], and assessors are directed to take career interruptions into account. There is a section for Research Opportunity and Performance Evidence (ROPE) – “we promote and encourage … those approaches that best recognise research excellence in the context of the diversity of career and life experiences”; “Periods of unemployment, or any career interruptions for child birth, carers’ responsibilities, misadventure, or debilitating illness will be taken into account.”; ” ROPE was introduced to help provide a more realistic consideration of a researcher’s capabilities and assist those who have had career interruptions for family and other reasons.”; ” It considers working arrangements, career histories and personal circumstances and provides an acknowledgement of research performance given the opportunities available.”

From the open-ended question on the poll, here are some responses that stood out that relate to explicit structures for taking leaves into account:

In the U.K. the Athena Swan agenda has led to very explicit recruitment advice around career breaks (not just parental leave). People may *think* negatively but the structure in my organisation anyway, makes expressing and acting on such views structurally difficult. Especially if I am on the panel…

My response to that: I’ve noticed this effect with the training the University of Michigan requires related to diversity & faculty searches. It doesn’t mean that everyone is magically free of bias, but it makes it harder to express and act on it.

Back to comments from poll respondents:

I recently applied for a Canadian award (geared toward early career faculty) where there was an explicit section for this: “Maximum one page outlining any leaves and/or relevant information about the candidate’s experience and/or career interruptions that will allow for a assessment of the application”. This was the first time I included details about my two leaves (each for 6 months) when my children were born. It felt so liberating to include this, and having a dedicated section felt like I was given permission to do so. Would be great if this became more common for awards/job searches/etc, but obviously would require that search committees don’t judge this negatively.

And this next one shows how this information could be useful from the perspective of a committee member:

Questions about productivity gaps come up, but generally remain unaddressed

Here’s another comment showing how useful it is to have opportunities to report leaves as a default part of applications:

In Sweden it is recommended to add it to your cv and included in online application systems for governmental jobs and grants /fellowships. Both productivity and eligibility for early career awards are calculated taking into account the time on leave. I think that having it as a box in electronic systems per default, as well as the fact that both men and women are likely to take several months of leave, helps making it something “normal” to take into account, and not something that would stand out in an application.

I think the culture in Canada is different – NSERC, for example, has section for ‘Delays in Research Activity’, and I have been told that delays are taken into account fairly, so that you should always list them, and my university also has an explicit section on the formal CV. (For example, if you’ve had delays, should reduce the number of years over which your contributions are evaluated).

I would love to see it become the norm in the US for award committees, search committees, and others to start making it clear that applicants are encouraged to include leaves (and perhaps to give a specific section in the application where people can list leaves if they choose). I imagine that, like diversity statements, this sort of shift could happen quite quickly.

One respondent noted that the highly varied and almost universally inadequate leaves that folks in the US get might make it harder to figure out how to take this into account. In my case, I was on “modified duties” after the birth of each of my children, but a) I’m lucky in that having been the case, and b) even with that, it’s not a full leave — it meant a reduction in teaching and service responsibilities, not being completely on leave from work. So, for me, if I wanted to use the model of listing it in the “Appointments” section of my CV, I could list the terms when I was on modified duties. I’m not sure whether there would be any impact of doing that now, other than to try to normalize having such leaves listed. (There’s certainly value in that!) But, for people who received only minimal or even no leave (in some cases in the US, a new mom doesn’t even get 6 weeks of leave), I’m not sure what system of listing makes the most sense. I’m also not sure of how to do the calculations suggested in the Science piece linked to above if there wasn’t actually a leave. But I think that’s part of why it matters for the award and search committees to give specific guidance.

What specific recommendations make sense? For awards, extending eligibility for any criteria that are time based (e.g., PhD in the past 3 years) makes a lot of sense. I think that’s already become the norm. For awards that don’t include such specific criteria and for faculty search committees, I think it could be as simple as including a free response box in the application with a prompt along the lines of: “If there have been any leaves, career interruptions, or major life events (e.g., birth or adoption of a child, elder care) that you wish us to take into consideration as we review your application, please provide that information here.”

What do you think? Do you think the committees in your department and your societies would adopt language along those lines? Do you see the potential for it to backfire?

4 thoughts on “Poll results: Good news! Listing parental or family leave on your CV seems more likely to help than to hurt. More committees should give applicants opportunities to list major life events.”