Last year, when I wrote a post with advice on strategies (and reasons) for working more efficiently, the first strategy on my list was:

In this post, I want to go into that idea more, since I think it’s really important (and since it’s one I need to continually remind myself of!)

Recently, I was helping some of my lab folks with a project that required, among other things, taking lots of pictures of Daphnia. The picture needed to allow us: 1) to measure her length (which requires seeing the eye and the base of the tail spine clearly), and 2) to see her coloration (as we were interested in how that changed over the course of infection.) There were a lot of Daphnia who needed their photos taken (I’ve already forgotten the exact number, but I think it was about 125), and we had to do other things with the animals, too. So, one thing that was important was that we get the photos taken relatively quickly — which is part of why I was helping out.

As I sat in the lab taking the photos, I got into a routine where it was taking me about 1 minute to take each photo . . . but only if I managed to keep myself from obsessing over trying to get the perfect photo. In this case, this photo: 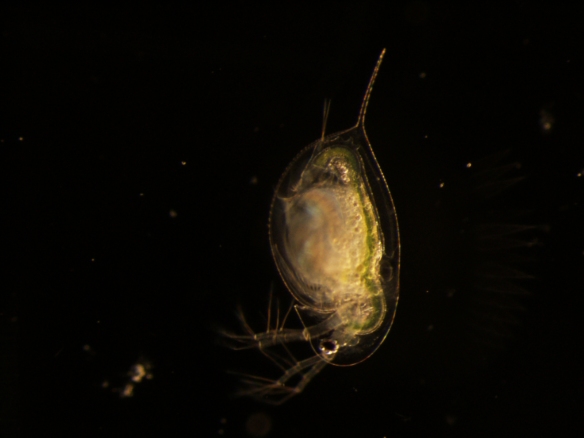 (look at all that crud in the background!) or even this photo: 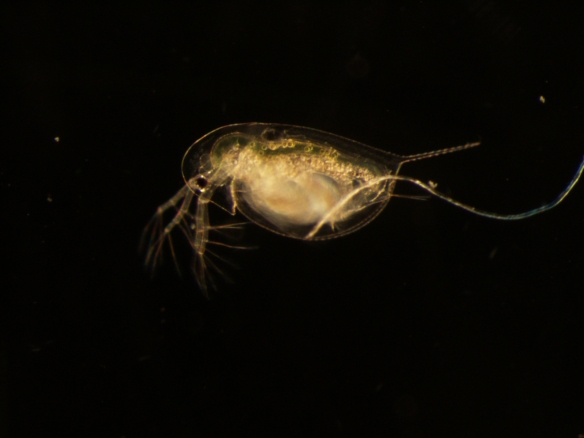 (ack! there’s a fiber on her!) was just as good as this photo (taken on a different day with an older animal):

In fact, those earlier two photos were even better for this purpose, because speed was important, both so we could get all the photos taken in a reasonable amount of time, and because leaving the animal on the slide for a while to get a pretty photo would risk stressing her out.

This was hard for me, because I love taking pretty Daphnia photos, and am proud that several photos I’ve taken have been on journal covers. But I had to keep reminding myself that, in this case, perfect was the enemy of good.*

This general idea is one that comes up a lot in science, and it’s a really important one. A key place where it applies is when writing. With writing, instead of perfect being the enemy of good, perfect can often be the enemy of done. For some people, trying to write something that is perfect makes it so that they don’t get anything written, which is a major problem. Sometimes, people end up paralyzed because they feel like nothing they write is good enough, and so end up continually deleting what they wrote (or never getting started in the first place). To tackle this, we use a strategy in my lab that we call ‘barf and buff’ (or, sometimes, ‘barf then buff’). It’s not an elegant name (and it’s not one I came up with, though at this point I don’t recall where I first heard it), but it gets the point across. Let the words spill out onto the page (however they come out), then polish those. Or, as the author Jodi Picault put it when asked about how she fights writer’s block (emphasis added by me):

I don’t. Writer’s block is for people who have the luxury of time; I started writing when I had three kids under the age of 4. I used to write every ten minutes I got to sit in front of a computer. Now, when I have more time, I function the same way: if it’s writing time, I write. I may write garbage, but you can always edit garbage. You can’t edit a blank page.

Okay, so perfect is the enemy of good (or done). But if you don’t have to be perfect, how do you know what is good enough? That requires thinking about your goals (and audience). As one example: If you are sending a manuscript to Science or Nature, you will likely spend a lot of time on the cover letter, as you are trying to convince the editor that your study is interesting and worth sending out for review. If you are sending a manuscript to a journal that sends pretty much everything out for review, spending days crafting the cover letter would be a waste of time.

To give a different example: when reading papers, sometimes you really want to dig into the manuscript deeply — perhaps because you are reviewing it or because it is closely related to your research. But other times, you might be reading it just to figure out one piece of information — say, what spore dose people use when working with a particular pathogen, or whether a particular organism is found in a particular location. It was based on reminding myself of the importance of “good enough” that I decided to give up on my #365papers goal for this year. I realized that it was making me feel like I needed to read all papers thoroughly (because I had set that as the bar for what papers “counted” towards my goal). That meant I was starting to spend time reading papers more carefully than I really needed to read them so that I could add them to my tally, rather than focusing on what was good enough for that paper. By stopping tracking what I was reading, I felt more free to read papers as much (or as little) as I needed for a particular goal.

In my experience, the concept of good enough is one that is really important for students to learn. Perfectionism can be a real problem (even though people often talk about perfectionism as a good thing). Trying to do things perfectly can be crippling (and associated with anxiety and depression). You will not design a perfect experiment. You will not write the perfect paper. Accepting that and recognizing what is good enough is a very important part of being a productive scientist.

Of course, figuring out what is “good enough” might not always be straightforward and can take time and experience. Hopefully this is a place where mentors can help if you’re unsure. But, in the absence of feedback from others, two things that help me are: 1) thinking about my goals (as I discussed above), and 2) thinking about what the consequences would be of missing the mark and not being good enough. Often, when I think more about what the consequence would be of missing the mark, it’s not nearly as dire as I initially imagined.

And with that, I think I’ll say this post is good enough. 😉

* Interestingly, at the time that I took those first two photos, I thought the pictures were really not good. But when I went back to them for this post, they don’t seem nearly as bad as they did to me at the time. Conversely, the “good” one doesn’t seem as good. That part often happens — I’ll be happy with a photo after spending a while trying to get a good one, but will be less happy with it when I come back to it later.