I am pretty much through with revisions to my manuscript on authorship, with one exception. One of the reviewers is (quite reasonably) pushing me to make a stronger recommendation about how authorship decisions should be made in the increasingly common case of collaborations between groups. But, of course, this is a tricky issue, and I’m waffling on what exactly to recommend. This blog post is me trying to work through that, and looking for feedback at the end. I’m quite interested in hearing how others think decisions about authorship should be made when multiple groups collaborate substantially on a project!

I’ll start by recapping some of what my results, since they set up the general question. Then, I’ll give some of my thoughts on what might be a proposed solution. And, as I said above, I’ll end by asking for feedback on what I propose.

My manuscript is interested in who is last and corresponding author as well as in the factors that influence peoples’ views on last and corresponding authorship. To assess the former, I did a literature survey of papers published in Ecology from 1956-2016, as well as in American Naturalist, Evolution, and Oikos from 2001-2016. To assess the later, I did a poll on Dynamic Ecology last year.

To no one’s surprise, the number of authors on papers is increasing: 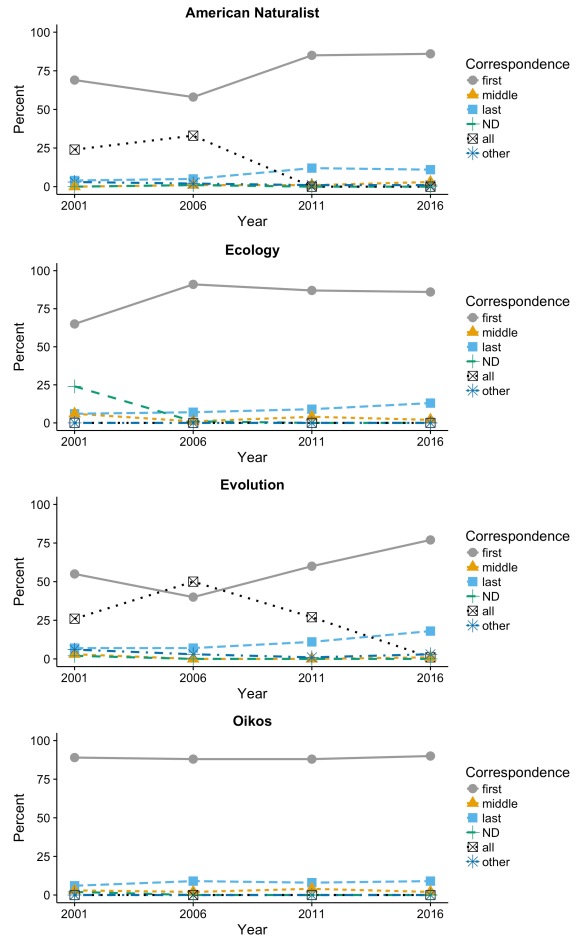 Most ecologists view the last author as a position of emphasis, though this view is not universal.

And most ecologists view the corresponding author as taking responsibility for the paper, but, again, there was variation in views (not to mention potential confusion about what the different survey options meant – one of my main conclusions from this work is that it would be really great if someone with qualitative research training tackled this topic!) 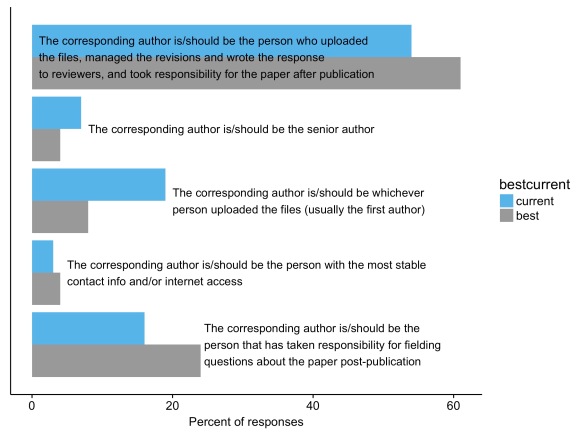 With all that as background: in the discussion of my paper, I note that attempts to infer the contributions of different authors based on who is last author and who is corresponding author will continue. We live in a world where many people who are assessing applicants (and even whole departments) do so by quickly looking over someone’s CV, at least as a first cut. So, for me, saying that we should not try to infer anything from authorship order is a non-starter. People are doing it and will continue to do it, so my goal is to see if we can at least make it a more reliable signal.

Given current practices (as indicated in the literature survey) and views (as indicated by the poll responses), I recommend that discussions of authorship have as their starting point that the senior author (that is, the head of the research group where the work was done) as the last author.

And those are just a few examples based on projects that my lab has been involved in! In all of those cases, both groups expended considerable effort (and, with the exception of the case where theory was developed, considerable expense).

When I wrote the discussion for the initial submission, I sort of punted on the issue, noting that it’s a tricky issue, saying that other fields use footnotes to indicate multiple last authors but that this isn’t common in ecology, and saying that, given the high stakes of tenure and promotion decisions, it would be advisable to include a short note in one’s dossier describing the authorship system used and noting exceptions. I also noted that, when making these decisions, it’s important to keep in mind that we surely have biases related to who is viewed as “senior”, and that this might impact views on who should be last author. (Notably, a recent study by Charles Fox et al. found that women are underrepresented as last/senior authors.)

That’s all fine, but one of the reviewers has pointed out (again, quite correctly!) that it would be a whole lot more useful if I had a recommendation for how authorship decisions should be made in these cases where multiple groups collaborate. If you’re thinking “authorship contribution statements!!!”, I think it worth keeping in mind that many people ignore them and/or don’t trust them.

So what should we do? The main recommendation I can come up with (and which is used sometimes now, albeit rarely in ecology) is to have a footnote indicating multiple “senior” authors on a paper. But I keep fighting against that in my head – at some level, I think that’s because it feels like salami slicing, and it makes me wonder how far it will go (6 “senior” authors on a single paper?) Then again, it might be that it feels wrong to me simply because I am used to the old system where there was one “senior” author, and I’m resistant to change because it’s different and I’m used to the old system. (I’ll file this under “signs that I am no longer ‘early career'”.) But I agree that the old system is outdated – modern ecology often involves collaborative projects between groups, and it is inescapable that people will try to quantify contributions to a project. So, perhaps the best option is to acknowledge that times have changed, that ecology today involves collaborations between different research groups, and to accept that the natural outcome of this is that, for some papers, it will make the most sense for there to be multiple “senior” authors on papers (and/or multiple corresponding authors).

Based on all that, right now, I am leaning towards recommending that, for papers where multiple groups contributed substantially to the project, in a way that makes it so that no one group can be viewed as having “led” the project, that should be indicated with a footnote (e.g., an asterisk next to the names of the last two authors with a footnote saying “these authors contributed equally”). I am also considering recommending that, in place of (or perhaps in addition to) author contribution statements, it would be helpful for some papers to say something like “Empirical work on this project was carried out by X, while mathematical modeling was led by Y” (where X and Y are either a person’s name or the name of a research group). There would still be the logistical issue that you have to list the authors in *some* order. Personally, I would default to alphabetical, but if the collaboration results in multiple publications, they could rotate through the order. (As much as I enjoy reading about things like brownie bakeoffs to determine authorship order, I don’t think they’re actually a practical recommendation.)

What do you think? What would you recommend as the best system for determining authorship in cases where multiple groups collaborated on a project, with no group as a clear leader of the work?

24 thoughts on “Who should be senior author on papers resulting from collaborations between multiple research groups?”